They got married on June 20, 1969 in my mom’s parents’ back yard in Parsippany, New Jersey. It was a small, simple wedding, officiated by the mayor, with just close family and friends attending. 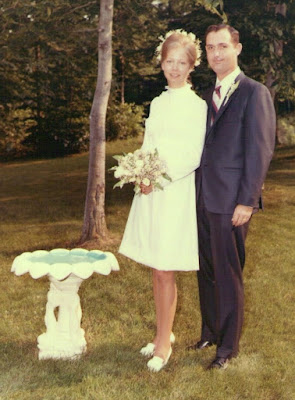 Many of my parents’ wedding pictures were taken next to a birdbath that my grandparents had in the yard. I remember that birdbath well from visits to my grandparents’ house as a child. It was pretty—molded concrete with three fish holding up the column, a petal pattern on the top, in gleaming white with the inside bowl painted light blue. It was very ‘60s.

In the '80s, my grandparents sold their home in Parsippany and moved to a new home they built for their retirement in Smyrna, Delaware. The birdbath moved with them and found a new home in their Smyrna back yard, under a young tree they had planted.

In 1992, my grandmother passed away, less than two years shy of my grandparents’ own 50th anniversary. My grandfather eventually remarried and sold the Smyrna house to move to Arizona. But the birdbath didn’t get moved this time; instead, it was sold as part of the property in Smyrna. And there it remained, under that growing tree, likely not given a second thought by the new owners of the house.

Over the years since then, whenever my parents drove by that old Smyrna house, they would stop to look at the birdbath, wondering how they could get it back in the family. They tried a few times to rouse the owners of the house, but never had any luck getting in touch with anyone to see if they could buy the birdbath back. My uncle had tried too, but all efforts were fruitless.

Then last year, when my parents were house hunting, hoping to downsize and move to Delaware themselves and enjoy their retirement closer to the beach, they saw that my grandparents’ old house in Smyrna was for sale again. They made arrangements and toured the home, gaining closure to continue looking elsewhere for a home of their own. They saw the birdbath then, but taking it wasn’t an option. Eventually, my parents found their own perfect house in the little town in southern Delaware, sold our family home of 38 years in upstate New York, and moved.

A few months ago, when my sister and I were visiting my parents at their new home, we drove through Smyrna on our way back to New York and stopped by my grandparents’ old house. We had talked about the birdbath in advance and had hoped that it would still be in the yard. If so, we were determined to do everything we could to recover it, knowing it would mean the world to our mom and dad. We even stopped at an ATM on the way, just in case we had to bribe the homeowners. 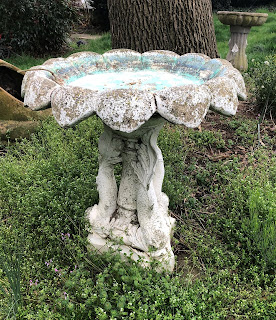 We were thrilled to find the birdbath still there, albeit neglected and crumbling apart under that now-grown tree. The yard had collected quite a bit of other statuary over the years … far different than the meticulously manicured yard that our grandparents kept.

My sister and I knocked on the doors and rang the doorbell of that old house, but couldn’t reach anyone inside. A neighbor was across the street, watching us as she worked in her yard, so we went over and introduced ourselves. That neighbor fondly remembered our grandparents and told us that that house had recently been sold again and was now a rental. She thought her husband might have the name and number of one of the tenants, so she went inside to find him. Indeed, he had some contact information and was glad to give it to us.

Standing in the street, I called the number the neighbors gave us. A nice guy answered and I explained our situation—that we’d love to find a way to buy the old birdbath in the back yard from them and restore it to our family. He said he couldn’t make that decision, as he was just renting the house, but he'd try to reach the homeowner to ask "as soon as he was finished with his game."

So, we waited. After a while, we figured whatever game the guy was playing must be taking quite a while, so we might as well just head back to New York. At least we had made contact, and maybe we'd be able to come back down to pick up the birdbath if the homeowner indeed agreed to let us have it.

As we were driving away—slowly, looking back at the birdbath with regret that we had to leave it—the guy called us back. He had talked to the homeowner and the homeowner said, “Just take it.” 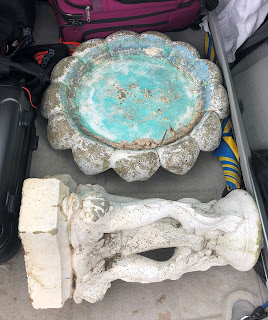 We were thrilled! We returned to the house, hurried to the birdbath, and together schlepped it back to car—through the minefield of doggie doo and overgrown grass that had become of the back yard. We were in our Sunday clothes; my good shirt and pants got all mucked up from carrying the dirty concrete pieces, but I didn't care. We had the birdbath. Finally!

We decided that the birdbath would make the perfect surprise 50th anniversary gift for our parents. We knew we'd all be together on a family vacation on their actual anniversary, but maybe our cousins who live close to our parents could help. We made some calls, sent some texts, and a plan began to brew.

The birdbath was in rough shape and needed some fixing up. It had a hole clear through the side of the bowl, was crumbling in places, and clearly hadn't had a good scrubbing in decades. So, I brought it to my home in Ithaca, New York and put it in my garage, hiding it under piles of recycling when my parents visited so they wouldn't stumble upon it and spoil the epic surprise. 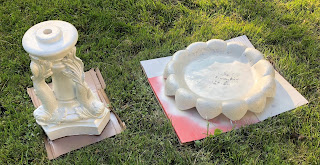 Over the next month or two, I cleaned the birdbath up, patched up the hole (mixing concrete and everything—an impressive task for my notoriously not-handy self), and painted it a beautiful shiny pearl color. I ordered a cut glass “diamond,” engraved with my parents’ names and anniversary date that could be placed at the bottom of the bowl, like a jewel under water. Then I got a big red bow and made an oversized tag with a little note on the back. 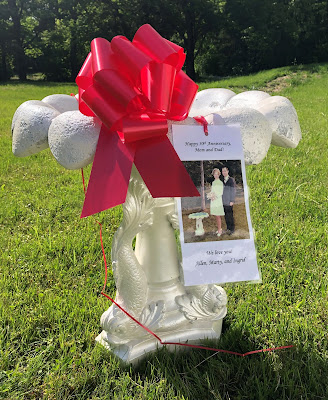 My family was all meeting in Las Vegas for my parents’ 50th anniversary. It had been over 20 years since we had a family vacation with all five of us, so we were overdue to spend some quality time together.

My parents planned to get home from our trip the day after their anniversary, so I made plans with our cousins to bring the birdbath to them ahead of time so they could set it up in my parents’ yard while we were away—complete with the big red bow. And so, before I flew out to Vegas myself, I drove to Delaware, met my cousins at a restaurant, dropped off the birdbath, then turned around and drove to Philly to catch my flight.

The plan worked like a charm. While our family was together in Vegas, my cousins set up the birdbath on my parents’ back patio—texting me that “the eagle has landed” with a picture of it perfectly centered in an alcove; my heart jumped with excitement!

I’ve saved and will treasure the voicemail my parents left me on the night that they returned home from our trip and found their gift. They simply couldn’t comprehend that this was indeed the birdbath—not a replica or replacement, but the original one—and couldn’t believe that we pulled something like this off. Our goal of surprising them was met with wild success, and the emotion and gratitude in their voices made it all worthwhile.

My parents have been married for 50 years. That’s 18,250 days (and counting) of being together, working together, parenting together, housekeeping together, traveling together, and joking together. Indeed, theirs is a relationship that has grown stronger and more precious with time. Through it all, they have remained each other’s best friend and partner—at home, in business, and in faith—and the love and respect that they show each other is something incredibly beautiful.

The birdbath is, in itself, nothing special; it's just concrete and paint. But what it represents—something solid, that after 50 years can still hold water—is priceless.

And now, it's back home ... right where it belongs. 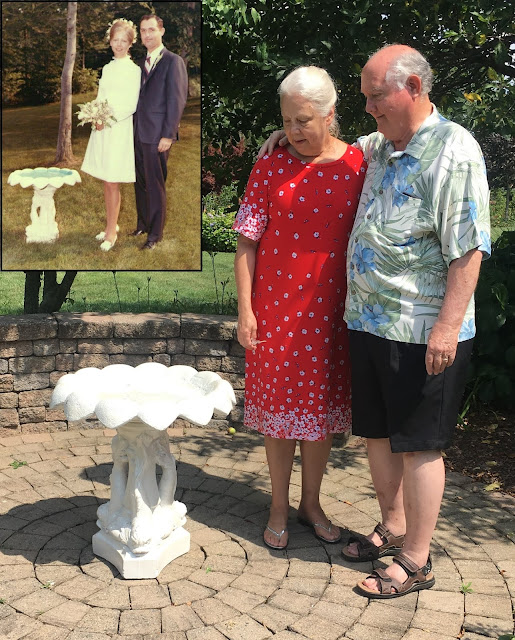 …
Marty Johnson is an entrepreneur, writer, and business coach. He serves as ex officio Director of Communication for AMBC, Editor of MBC Today, and is the owner of Uncle Marty's Shipping Office in Ithaca, NY, where he's also Co-Founder of the Collegetown Small Business Alliance. Please visit him at askunclemarty.com. #AskUncleMarty