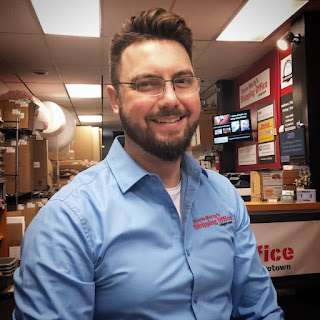 When he was young, growing up in Endicott, New York, Marty desperately wanted to be an astronaut. NASA was on his mind, from Halloween costumes to a little space suit for his beloved Cabbage Patch Kid, Sean. His focus shifted from outer space to under the sea sometime in the mid-80s, and from elementary school through junior high he was obsessed with becoming a marine biologist, hoping to study blue whales and other giants of the sea, and definitely planning to train dolphins on the side. In high school, his focus shifted again and he thought about possibly going into architecture…and then horticulture…and by the time he graduated he decided it was probably best to pursue medicine, so looked at colleges with pre-med intentions.

Marty studied biology and psychology at Binghamton University, where he played viola in the symphony and performed in a theater troupe. After two years, he transferred to Texas Tech University and entered business school with a marketing focus. While in Texas, he worked for the university’s athletic department and helped promote major sporting and concert events at local venues—once even receiving his own semi-private Elton John concert (seriously). He spent the summer of 2000 studying international marketing and international management at Buskerud University in Hønefoss, Norway, where he explored his Norwegian heritage. In 2001, Marty graduated from Tech with honors with a B.A. in marketing and spent that summer road tripping across the United States. The travel bug continued, and by the time he was 30 he’d been to 17 countries and 49 states, calling eight of them home at times.

Marty’s work experience has been just as varied, bringing him from his young start in his family’s packing and shipping business in 1991 to working in fields including athletics, fashion, event promotion, small business consulting, trade organization management, real estate staging, office products sales, and government bid development; he's even spent time as a minister, a substitute teacher, and a 5th Avenue window dresser.

In 2011, Marty opened Uncle Marty’s Shipping Office, a hip, inclusive, and sustainability- and community-focused business center adjacent to Cornell University in beautiful Ithaca, New York. There, as a co-founder of the Collegetown Small Business Alliance and an active member of the Tompkins Chamber, Marty works closely with his neighbors and local officials to find opportunities and solutions to local challenges and ensure their one-of-a-kind community remains exceptional.

In addition to being a small business owner, Marty volunteers as Director of Communication and Advisor to the Board for the Association of Mail & Business Centers (AMBC), having previously served as the non-profit’s board chair. He remains the lead instructor for AMBC’s certified training courses in advanced packing and global shipping and has also taught his peers on subjects including marketing, branding, team development, brick and mortar aesthetics, social media, and relationship building.

Marty has been honored to be a panelist and instructor at summits and industry events across the country for well over a decade, and both he and his business have been featured multiple times in industry publications like FedEx ShipSource® and MBC Today. In fact, after years as a contributing writer and columnist for MBC Today, he’s now the magazine’s editor and producer; his business advice column, Ask Uncle Marty™, is a favorite among readers. Marty counts it a true privilege to serve as a voice, leader, influencer, and mentor in his communities and the unique, ever-changing retail shipping and business center industry.

In 2012, Marty was diagnosed with a rare and aggressive form of non-Hodgkin lymphoma. Because of early detection, intense chemotherapy, a brilliant team of caregivers, a faithful army of family and friends, and the firm conviction that the experience had a purpose, by grace he survived and remains cancer-free to this day, his belief in silver linings affirmed with each new day and opportunity.