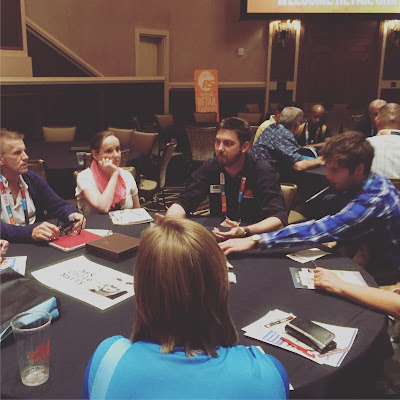 I had the privilege of doing a live version of Ask Uncle Marty™ during the speed rounds at the 2016 Retail Shippers Expo last week in Vegas.

The speed rounds are cool. Experts from across the retail shipping, mail, and business center industry host eight-minute round table discussions with Expo attendees on topics ranging from shipping freight, large format printing, and gift wrapping tips to small business accounting, maximizing point-of-sale software, and marketing with Pokémon Go. Speed rounds are billed as the "retail shippers' version of speed dating," and are a favorite part of the week's events.

My table, I'm honored and grateful to say, was full for most of the sessions. People had questions! And they were good ones! We tackled store design, maximizing traffic patterns with smart layouts, where to start with small business social media, how EDDM from the USPS works, and so much more!

I encouraged everyone to write to me. My favorite letters and responses get published bi-monthly in MBC Today, as they have been for a couple of years now, and others will soon be shared on my blog.

I'm seriously encouraged and profoundly grateful that people from all over the country are reading and enjoying Ask Uncle Marty. What started as a humble tongue-in-cheek Dear Abby-style industry advice column has grown to encompass marketing and image tips and consultations for businesses and organizations of all sizes (though the amazing small businesses in the retail shipping, mail, and business center industry will always be my BAE).

Here's to a fabulous future!

The Frog Got Toad, and Other Lessons from Delta

I got to McCarran Airport on time.

I had checked in and checked my bag early this morning, so all I had to do when I got to the terminal was drop my extra suitcase at the baggage drop.

Rarely do I check a bag. But I had lots of stuff from the 2016 Retail Shippers Expo--supplies and swag for my Marketing with Marty™ seminar, samples and swag for a practical packing breakout session, signage and swag for my Ask Uncle Marty™ Live speed rounds, and of course a top hat and wig to make co-hosting Employees vs. Bosses: The Ultimate Showdown with my cohort Fahim, of the famous #FahimFix, as ridiculously fun as possible. But I digress…

I soon found myself in the baggage drop line. At a quick head count, there were 50ish passengers winding through a maze of ropes, just to drop off prepaid checked luggage with a single Delta employee at the counter. With each painfully slow interaction at the counter, exponentially more fliers poured into the accordioned line. There was little recognition or empathy for the winding throng of passengers and their anxious, panicked, astonished stares.

After about 20 minutes of barely moving, another agent came out and called the flights that were about to take off. She let passengers trying to catch them skip to the front of the line. She was treating a symptom, not the cause.

Meanwhile, someone a few dozen suitcases behind me realized that there was no line at the curbside check-in and sent his son to check it out.

When the curbside team realized the bottleneck inside, one of their agents came in and announced that, "If you're not paying cash and not flying internationally, come and drop your bags with us at the curb. We're much faster at processing them (throwing serious shade at the counter rep we were all frustrated with) and there's no line."

I ducked under the rope, out of the maze of annoyance, dropped my prepaid bag at the curb, and booked it up the escalator, down the hall, through security, down another hall, to the tram, and all the way down Terminal D  to my gate near the end. (Why is it always the gate near the end?)

The Frog Got Toad

I made it to gate D38 with five minutes to spare. As I plopped and sighed into a seat, the gate agent made an announcement.

"Today is National Tell a Joke  Day. If anyone would like to come up to the mic and share a joke, we'll give you two free drink vouchers. You'll probably need to get a little toasted on your flight to Detroit anyway."

Was this Delta!? Could this moment of
levity be from the same formal, traditional, scripted airline that I'm so used to?

One passenger felt inspired, stepped up to the podium and proclaimed, "A limerick, a play on words, and a riddle walked into a bar. No joke." A few people looked up and grinned.

Another gave it a shot with, "What happens when a frog's car breaks down? It gets toad." A collective chuckle rose from the impatient passengers. Smiles broke. Tensions eased. 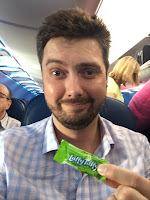 As I boarded, the gate agent gave out Laffy Taffy. Yes, Laffy Taffy in honor of National Tell a Joke Day!

The agent, while making my phone go "bloop" on the scanner, told me that her favorite flavor is banana. There was one banana taffy left, and we both spotted it at the same time. So I picked sour apple, leaving the banana for her.

As I sat in seat 18D--on the aisle as us tall, gangly folks tend to prefer--announcements came that one more passenger had to be taken off the flight to reduce the load for safety. Per usual, a $400 travel voucher was offered. No one bit.

Then my new gate agent friend came on board. She upped the ante to a $500 travel voucher "and a banana Laffy Taffy." We had a volunteer; the problem was solved.

While some were just doing triage, consequently getting farther and farther behind, other Delta team members saw the root cause of the problems and did what they could to loosen bottlenecks, put the customers first, and brighten the collective mood.

I suspect that Delta marketing peeps had a hand in the taffy idea. But I know that their empowered, personality-driven curbside check-in and gate agents were the crucial make-or-break link that calmed frustrated passengers and brought a little humanity back to air travel.

Delta has taken little steps toward improving the customer experience and embracing the millennial mindset--valuing individuals and fostering a personal connection with clients. Here's to many more … and a couple more agents at the baggage drop counter.