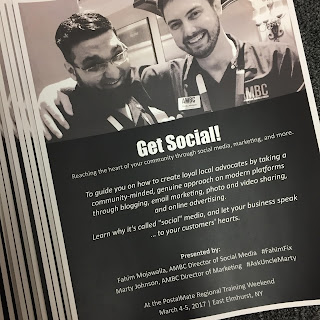 AMBC's dynamic duo, Fahim and Uncle Marty, are teaming up and teeming with excitement to present our brand new class, Get Social!, at the PostalMate Regional Training Weekend this Sunday in New York. Our new seminar takes the concept of how we behave in social settings, among peers, and in our communities and applies it to social media strategies.

There's nothing quite like getting together in a room with other small business owners to share ideas, information, and inspiration. But what is it we're actually doing when we're together? Sure, we're training. Sure, we're learning new techniques. And absolutely, we're discovering a myriad of new features in our software. But we're also building a community. We're discovering people in very similar situations to our own and creating bonds with them that will last a lifetime. We're making friends, sharing laughs, and bringing why we do what we do back into focus; we're sharpening our intentions.

This societal concept is exactly what we'll communicate through Get Social! We want to guide our peers away from using social media platforms—those amazing, revolutionary, and free tools at our fingertips—to blatantly advertise and instead encourage their use for building a community and creating a genuine following of loyal advocates—not just customers, but dedicated clients and friends of your business.

Though Fahim and I have collaborated on projects more times than we can count and work closely together as members of the AMBC Board of Directors, this will mark the first time a #FahimFix social media seminar and a Marketing with Marty™ marketing and image seminar officially team up to co-present a class. And we're pumped!

We must thank PC Synergy and the PostalMate team in advance for inviting us to their regional events. We are honored to be able to share, thrilled to participate, and very grateful to glean from other presenters and attendees.

If you're unable to attend this weekend's event, don't fret. We and the rest of the AMBC Board have a habit of popping up at events here, there, and everywhere, always ready to share fresh, timely content. So stay tuned!

My brother Allen and I were listening to a Ted Talk podcast yesterday. In it, Jonathan Rossiter, a charming roboticist, was talking about creating new kinds of robots. As he was describing biodegradable robots and detailing how to make basic components at home, he said in his delightful British accent, "If you take some jelly and some salts, and do a bit of jiggery-pokery, you can make an artificial muscle."

In what must have seemed like choreographed synchrony, Allen and I both gasped, looked at each other, and burst out laughing.

"Jiggery-pokery?" What was this delicious new phrase? And why had we never heard it before!? We were instantly obsessed.

We finished the Ted Talk, all the while laughing and completely amused by our new favorite verbalism. Both of us, I'm sure, were trying to figure out in our own heads how we could casually interject "jiggery-pokery" into a sentence as soon as possible … because that's how brains work in our family.

The next podcast in queue was a Grammar Girl episode on double dactyl poetry. (And let me quickly interject how much I love Grammar Girl. She's pretty much my hero. I never miss a lesson; I'm enlightened each and every engaging episode.)

Mignon Fogarty, Grammar Girl herself, in honor of National Grammar Day, was giving us a lesson on dactyls—three syllable words or phrases where the first syllable is stressed and followed by two unstressed syllables, like "octopus" or "applesauce." Then we learned about double dactlys—a distinct form of poetry in which the title is always a two-dactyl proper noun, like "Grammar Girl Fogarty" or "Jonathan Rossiter."

We learned that often the first line of a double dactyl poem is a silly or nonsensical phrase, like "Hibbely dibbely" or "Capital underpants." Then Mignon told us where to find the rest of the requirements for a proper double dactyl: in the introduction to the book Jiggery-Pokery: A Compendium of Double Dactyls.

What!? There's a book titled Jiggery-Pokery!? Like, this is a real thing and not just an amusing phrase perfectly punctuated by British roboticists when they're talking about putting salt on household jelly to create homemade robot components? The revelatory moment for us two word nerds was too blissful to describe.

So as a heads up, you'll be seeing and hearing much more jiggery-pokery from my brother and me going forward. Because, after all, phrases like "jiggery-pokery" are what make the English language okery dokery.

Now you can grab each one by the hand, look them in the eye, and say, "I love you, customer." But you're probably going to either get slapped or put on some community watch list. So rather than saying it, show it. 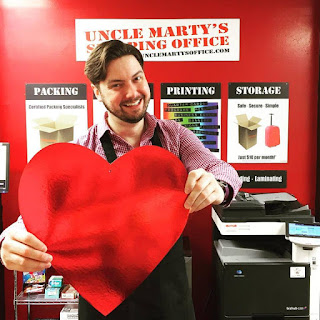 Show you care by going above and beyond. Hold the door, put their packages safely behind the counter so they can shop, and offer them a bottle of water if they're all hot and bothered.

Show you care by remembering as many people as you can … by name. Don't repeat their name over and over like you're trying to sell them a used car, but greet them by it and use it once more when you thank them for their business and invite them to "come back soon." (And you're all doing this as a farewell, right? We've talked about this before. Consciously work on replacing "Have a nice day" with "Come back soon" and the results will surely delight you!)

Show you care by writing a handwritten thank-you-for-trusting-us note every time someone puts their faith in your business for something precious and special.

Show you care by putting just as much importance on welcoming customers' children and pets as you do on welcoming the customers themselves.

Show you care by giving your guests a little piece of candy. This time of year, I love to give out little mini boxes of conversation hearts to my favorite clients, and to some random ones just because. And not just because I'm trying to charm my way into their wallets, but because it's genuinely a good feeling to see someone's face light up.

Show you care by making sure every customer that walks through your doors leaves no longer as just a customer, but as a client--thrilled with the service they just received and cordially invited to come back soon.