It's a Small, Small World

I just got back from a vacation—the first real vacation I’ve had in over eight years.

Don’t get me wrong, I’ve traveled plenty, but it seems it’s always been for a conference, summit, gig, meeting, funeral, or some other event that I needed to be at. In fact, this weekend I’ll be in Delaware for a wedding open house, then the next weekend in Albany for some faith meetings, and then the following weekend in St. Louis to teach at an industry event. Sometimes it feels non-stop.

I’m not complaining. Goodness, no! I’m incredibly grateful for all the opportunities I’ve been afforded and privileges I’ve had. I knew the grind that I was getting into when I opened my business, and I could easily have said no to everything else that has come my way … and to many things I've had to do just that. But, for the most part, the opportunities I’ve said yes to have led to wonderful privileges, honors, and the ability to connect with people on much bigger stage than I would otherwise have had access to. It’s awesome!

When I’ve traveled for events, occasionally I’ve been able to tag on an extra day or two piggybacking them to get a little down time, but that’s not the norm. Usually, I’ve needed to rush back because of my business—a venture that has demanded much more than my full-time attention since 2011. And, yes, over the years there have been a few times when I’ve been able to sneak away for an occasional weekend here and there. Like this past New Year’s when timing worked out that my business would be closed for a long weekend, so I went to Montreal for a few days. But it’s been a long, long time since I’ve been able to take an official, just for Marty, gone more than a few days, gosh darn legit vacation. 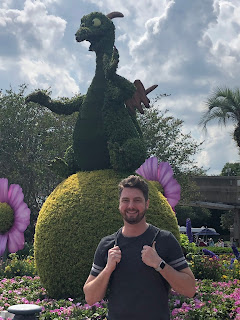 I don’t even know if we can call last week anything significant as far as the grand scope of possible vacations goes. It’s not like I had to break out my passport or anything. I just went to Florida—a couple days getting sand in my toes at a resort in Cocoa Beach, then a couple days poolside with my nose in a book in Orlando, and finally a few days staying with friends in Kissimmee, doing the Disney thing. Regardless of the caliber of the get-away, the bottom line is that I finally spent a full week out of the office on a non-event related trip. And that’s a huge win for me.

Lately, I’ve mostly traveled in social media silent mode, choosing to abstain from posting anything and therefore avoid comments like “Oh, you’re in Phoenix! Let’s have lunch!” or “OMG! I’m in Vegas too! Where are you staying!?” or “Why didn’t you come see me!? I’m only an hour away from there!” While I’d love to have the time to see friends and family in different parts of the country, time is so limited on those trips that it’s easier to just not post than to disappoint or offend anyone that I’m just not able to get together with. Besides, when I do get the chance to get away, the whole point is to do just that: get away.

You see, as an introvert I crave nothing more than shutting the world out and having time all to myself. It’s why I prefer to live alone, dine alone, and travel alone. I’m not saying that I don’t like people. On the contrary, I’m outgoing, a great host and entertainer, and have made a decent career because of my personality and the connections I’ve made. But entertaining drains me, and I need to be alone to recharge. Extroversion and introversion have much less to do with personality or people skills and much more to do with what a person needs to be energized: extroverts get their energy from being around people, while being alone drains them; introverts like me recharge when they’re alone and eventually lose their oomph if they don’t have enough personal space.

Anyway, last week while I was in Florida I decided I’d break my social media silent trend and go ahead and post some updates, figuring that I could just politely say no if someone wanted to bogart my vacation with—Heaven forbid—a friendly visit. And this plan worked like a charm. That is, until one of my favorite people—my dear cousin with whom I haven’t spent time in nearly 10 years, since the days we both lived in New York City at the same time (to this day the only cousin I’ve ever lived in the same city as … ever)—saw one of my posts and reached out to me because she too would be in Orlando later in the week for a conference. For her, I was genuinely excited to make plans to meet up.

In fact, it worked out perfectly. I was nearing the end of my trip and had already planned to stay with friends from that point on, with my best friend flying in the same day to meet me and do the Disney parks together. My best friend, you see, is a Disney annual passholder (which, by the way, if you cover up the “p” on makes for wonderful hilarity amongst friends) and was on her way down to join me for a few nights with her cousin/goddaughter and boyfriend, who both work at the Disney parks and had offered to put us up and give us insider tours. So, long story long, on Thursday night my best friend, her cousin, her cousin’s boyfriend, her aunt (who also happened to be there at the same time), my cousin, and I all met at Disney Springs for an evening out. It was delightful!

Contrary to what it must seem like at this point, this actually isn’t a story about travel, family and friends, introverts and extroverts, Disney parks, vacations, or any such thing. It’s actually a story about the power of a brand and the validation I’ve just recently realized in my own brand’s reach and strength. Let me explain… 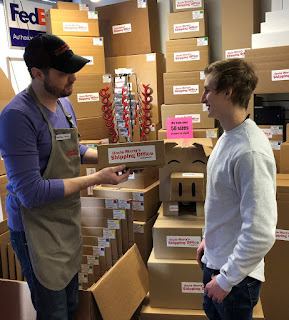 My friends and family all know my brand: Uncle Marty’s Shipping Office. My business has a recognizable logo and a loyal following in my community and online. My team and I make sure that every box we sell is branded with our logo—a simple step that has made a big difference in our marketing efforts. Box branding is intended mostly for local reach, with our boxes being used around town, acting as mini billboards for the business. And every now and then I’ll get a message or see a post from somewhere far away where our boxes have landed, which is always cool to see.

So, imagine how cool it was when my cousin—the one with whom I had dinner Thursday night, but hadn’t really seen for 10 years prior—texted me on Friday and said that someone just walked into her conference in Orlando carrying a box with my brand on it! She recognized the logo immediately, stopped him, explained that she was my cousin and had just seen me the night before, and asked what his story was.

It turns out that this guy happened to be in my town a few days earlier and had stopped into my store to have his conference materials packed and express shipped to his hotel in Orlando. He said that Clark, my team member who waited on him, was exceptional and his experience was top notch (which, let me tell you, warmed Uncle Marty’s heart more than anything in the world). He had picked up his box of materials (bearing my brand, having been shipped from my store) from the hotel desk and was headed into the conference when my cousin saw him.

I was blown away. What are the odds? If I didn’t believe in the power of a brand before, I sure do now. And if I didn’t know the power of exceptional client service, creating a lasting impression and turning a walk-in customer into loyal advocate, I sure do now. This guy was really impressed with his experience, now brandishing my brand 1,200 miles away from its brick and mortar location and telling someone he just met how happy he was with service he received a few days prior.

Now, to put the cherry on top, when my cousin texted to tell me all of this on Friday, I was getting ready to go on the classic and beloved It’s a Small World ride. I know it’s cheesy, but that ride, along with Space Mountain, was one that I looked forward to the most. As our boat wound through its tunnels, with hundreds of animatronic children in cultural attire singing out …
It's a world of laughter
A world of tears
It's a world of hopes
And a world of fears
There's so much that we share
That it's time we're aware
It's a small world after all

(And for the cherry on top of the cherry, when my cousin boarded her flight back to Chicago on Saturday, the man with the box happened to be on the same flight. Whaaat!?)

My vacation was long overdue. On it, I finally truly relaxed. I let my hair down, let loose, and got a pretty sweet tan. But, most of all, I learned to trust more: trust my team, because they’ve got this; trust what we’ve built, because it’s got legs now and can stand without me having to shoulder every burden; trust the army of advocates that seven and a half years of outstanding service has created, because they’re going to fight for what they believe in.

And I know now—for sure, without a doubt—that the brand I and my team have created is something that people believe in. It’s not just something that has potential anymore, or something that someday may become something. It’s actually already something, and it’s making a difference and standing out in this small, small world.

Marty Johnson is an entrepreneur, writer, and business coach. He serves as ex officio Director of Communication for AMBC, Editor of MBC Today, and is the owner of Uncle Marty's Shipping Office in Ithaca, NY, where he's also Co-Founder of the Collegetown Small Business Alliance. Please visit him at askunclemarty.com. #AskUncleMarty