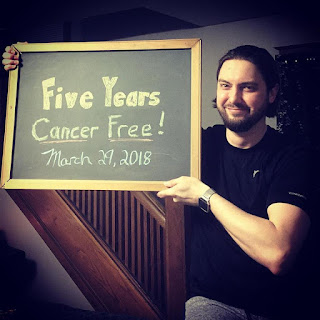 Five years ago, six words changed my life. It was Good Friday, March 29, 2013, and I was on the phone with Lacey, one of my favorite nurses on my oncology team, anxiously awaiting the results of my post-chemo PET/CT scan. She read the results to me, joyfully proclaiming that the scan showed "complete resolution and response to chemotherapy." And as she said those six beautiful words I felt a giant burden lift off of my shoulders—realizing in that moment that I had officially become a cancer survivor.

Five months before that, I had gone to see my primary care provider for a sore throat and a swollen tonsil. My tonsil was starting to get big, visibly protruding out of the side of my throat; it was super weird. My primary had never seen anything quite like it before, and neither had some of his associates—an instructor and student who were in his office observing that day. They were all curious, and one of the associates exclaimed after looking at my rogue tonsil, "That's quite impressive!"

My primary wondered if perhaps it was a virus or something causing my tonsil to react and swell, so he swabbed and tested everything he could but the results all came back negative. By my follow-up visit eight days later, my tonsil had grown about 25% larger. We thought that clearly there must be an abscess that was causing it to grow so big, so fast, becoming so large by that point that it was blocking a good portion of the left side of my throat and affecting the sound of my voice. It was very concerning, so my primary wasted no time and got me a same-day appointment with an ear, nose, and throat specialist (ENT, or otolaryngologist … for short).

I went directly from my primary's office to the ENT's where I was told very coarsely, "That's not an abscess. It's a growth." Just like that, I learned that I had a tumor. My breath left me, but the doctor didn’t seem to realize that he just told me that I likely had cancer. He just plugged forward, business as usual, scheduled a tonsillectomy for a few weeks out, and ordered X-rays to be done right away.

In a daze, I made my way to my car in the parking lot of the ENT's office and just sat there—wondering, worrying, crying, and trying to catch my breath. Then my primary called. We had joked that morning in our worst Arnold Schwarzenegger impressions that "It's not a tumor." But now we both knew that indeed it was, and we both knew what that meant. He consoled me and reassured me—as a physician and a friend—that we'd get the best people on this right away; that I was strong and able to fight this.

When the X-ray results came back a few days later, the ENT I had first seen was away, so his partner looked at my file and decided that he wanted to do a biopsy of the tonsil instead of a tonsillectomy. So, on Halloween, I found myself back at the ENT's office while the new doctor examined me, prepped me for a biopsy, and accidentally sprayed lidocaine all over my face before getting it down my throat where it was intended—serving as a much-needed mood lightener, even if my face went a bit numb. Then he used a steel tool to take a chunk out of my tonsil. I can still hear the crunching sound that tool made as it clamped down in my throat. That biopsy confirmed that I had cancer.

My first of many PET/CT scans happened next, followed right away by an appointment with the best oncologist in the area, whom my primary made sure I got in with. On my very first visit, my oncologist performed a bone marrow biopsy and I learned that I have some of the strongest bones he’s ever encountered, having to put his entire weight into the tool he used to dig into my rear pelvis, through the bone, and withdraw a piece of marrow to determine if cancer had spread there yet. It hadn't, but I did have other tumors that were starting in other lymph nodes.

The type of cancer I had was a very rare form of non-Hodgkin lymphoma, so I was sent right away to Boston to consult with one of the top rare lymphoma specialists at the Dana-Farber Cancer Institute. That specialist clarified my diagnosis and told me that the type of cancer I had was one of the fastest growing cancers that they know about. He recommended a very intense chemo regimen, feeling I could handle it since at 33 I was still young and strong. But he also told me that if it had been just a few more weeks my chances of survival would have gone down to only 20-30%. Early detection saved me, and I consider it nothing short of a miracle that the first tumor appeared in my tonsil where I could see it and not in a lymph node that might have gone undetected until it was too late. This specialist would consult with my local oncologist and act as a guide, which meant that I could receive treatment in my home city and not have to stay in Boston. That was a relief.

Chemo was indeed intense. I spent the next four months in treatment, mostly inpatient with one- to two-week stays in the hospital during each cycle. I had a port implanted in my chest to make administering intravenous chemo easier. I often had chemo going around the clock, along with constant saline in my IV, which meant that I constantly had to pee. I had to take rescue medication after some of the strongest chemo rotations in order to bring my body back from the brink that those drugs intentionally drove me to. I received multiple intrathecal injections in my spine, fascinated each time while I watched the live X-ray in the operating room guide the surgeon's ridiculously large needle through my vertebrae and into my spinal cord. Of course, the operating room staff also said I was notorious for singing obnoxiously loud along with the radio as I got high on anesthesia while they prepped me for those injections, so I really can’t trust my memory of what happened during those intrathecal sessions 100%.

I lost every single hair on my head and my body. When I threw up, it was painful because my mouth and throat were often coated with sores, as is quite common for chemo patients. I received a slew of blood and platelet transfusions along with countless shots to help my body make more of its own blood cells to replace the ones being killed by chemo. Every bone in my body ached because of those injections as my bone marrow worked overtime to replace missing cells. When my red blood cell count was low, leaving my system without its trusty oxygen carriers, my breath got heavy and fast—my lungs panting as they did all they could to bring more oxygen to my bloodstream. My skin lost color, crawled, itched, flaked, and ached. (Yes, my skin ached.) I lost muscle tone. I sometimes lost my balance. I often lost my patience. And I lost nearly 50 pounds.

My family and friends rallied. My mom took over daily duties at my year-old business. My dad bought me groceries and drove me to and from appointments. I didn't see too many people, often having to keep myself isolated to prevent catching anything while my system was down, but my parents and best friend came to the hospital whenever they could. My sister, who was living in Texas, came home for a month to be with me. On good days, we'd play cards in the hospital, and on bad days she'd just be there if I needed her. I talked her out of shaving her head for me, though must admit I was incredibly touched when a good friend and his son surprised me by shaving theirs. I received so many cards and care packages, each one meaning the world to me. My mom crocheted me a bunch of hats, as did a dear client of mine, and I wore them proudly. 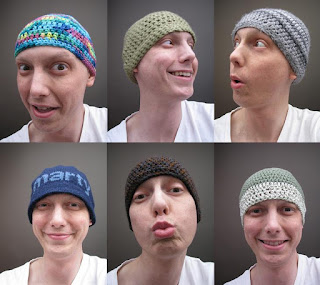 Sometimes I wanted visitors, but often I just wanted space. I worked as much as I could, accessing my business computers remotely from my laptop on the hospital bed, and because sleep is tough in a hospital when you have to pee every hour on the hour and have nurses constantly changing your IV, I slept in small stints and caught up on my Hulu and Netflix queues when sleep was impossible. I kept an online journal so those interested could know some of what was going on, even if the more gruesome details were never shared. I brought my own pillows and blankets with me for my stays, much to the amusement of the hospital staff, and had a different loungewear outfit each day—not about to don a breezy hospital gown if I didn't have to.

On days when I had an appetite and felt like I could keep food down, I'd devour as much lemon meringue pie as the cafeteria would send up. I became known to the cafeteria staff as that persnickety guy on the 5th floor who refused to eat from hospital plates and flatware, instead requesting everything be sent up with disposable dishware because just one whiff of or glance at the not-sure-where-they've-been hospital dishes was an instant nausea trigger. And the sweet older foodservice man that often brought my meals never could get my name right. To him, I was Marian.

The oncology team that worked with me, including the staff on the hospital floor where I spent most of those treatment months, was tremendous. I still get hugs when I visit, exchange Christmas cards, and continue to fail to be able to express my gratitude as much as I owe to them. They saved my life.

That battle is over, but the vigil will continue the rest of my days. Over the last five years of follow-up, I've amassed quite a team of doctors, gaining new specialists each time something looks or feels a little funny. I've had biopsies on everything from my bladder to my kidney and scopes shoved up places I didn't even know scopes could go. Eventually, after it was all said and done, I did have that tonsillectomy. My port finally came out after a year, and the scars it left on my chest and neck are ones I wear proudly. My damaged teeth got restored—whitened and filled or filed and crowned—so I can smile as big as I want to now. And yes, I still get incredibly anxious every time I think I may be getting a sore throat.

Oh, it's been an interesting ride. Someday I’m going to write a book about it. But on this day, March 29th, I will always think back to those six beautiful words Lacey read to me in 2013: "complete resolution and response to chemotherapy." And I'll well up, overwhelmed afresh with thankfulness. 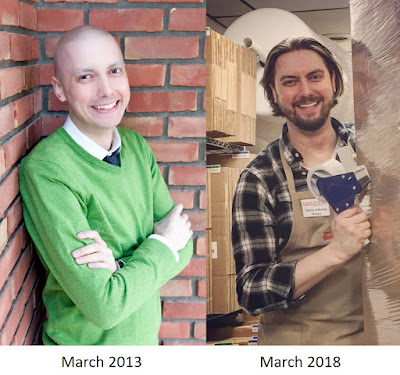 Everyone's diagnosis and treatment experience is different. Variables like cancer type, sub-type, stage, overall health, treatment plan, healthcare access, doctor knowledge, age, aptitude, attitude, desire, genetics, insurance, and so much more go into determining what a patient will go through, symptoms they will have, and steps they will take.

I state this to help the public understand that saying things like, "Oh, I know someone who had that!" or "Yes, my friend went through the exact same thing." or "Well, that type of cancer isn't that bad." is inappropriate most likely untrue. Please don't compare. Just show compassion.